Alan J. Robinson brings over 30 years of security/law enforcement experience to the security, safety, fire safety, emergency management field. He is a former Supervisor, Protection Services for Disney-ABC, Inc. in New York, where he coordinated the security of millions of dollars in equipment for both Reagan Presidential Inaugurations. While at Disney-ABC he was credited with creating the first hostage negotiation training class after an incident at ABC News in Washington, D.C. Provided executive protection for Disney-ABC executives and celebrities.

In 2007 Alan Robinson was awarded the “Campus Safety Director of the Year” by Campus Safety Magazine and recognized as a public safety professional “who goes above and beyond the call of duty, demonstrating outstanding leadership skills, ingenuity, selflessness, and overall achievement.” 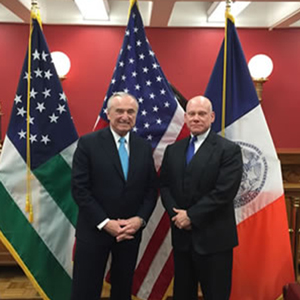 For over 30 years, Mr. Robinson was the corporate director of protection and security services/emergency management for one of the largest healthcare corporations in the Northeast; he directed investigations concerning: workplace violence incidents; drug/narcotic diversion incidents with patients, physicians and nurses; theft; corporate compliance and red cell (penetration studies) at over 300 locations and six (6) acute care hospitals. Mr. Robinson is a nationally known expert in protecting children from sexploitation and molestation and a certified Crowd Manager from the International Association of Venue Managers.

Our mission is to anticipate, identify, prioritize, manage and monitor the portfolio of business risks that may potentially impact an organization. Assist with implementing policies, processes, and enabling technologies to execute that approach successfully.

We are prepared to provide expert witness testimony to any negligent security case (plaintiff or defendant), proactive threat analysis, etc.